I change the blog platform and URL

I change this blog to this URL: http://agustin.ejerciciosresueltos.com
Bye

Posted by Unknown at 20:57 2 comments: Links to this post

Posted by Unknown at 20:55 No comments: Links to this post

mEDUXa Beta product is out

This week we have finished the beta product of mEDUXa.

Here you can see the team that has been working lately on mEDUXa. From right to left you can see:

mEDUXa is presented with three basic profiles. The one for primary school students, another one for secondary school students and a teacher profile. In fact, the only differece between the last two profiles is tha capacity teachers have to configure printers or to install applicattions. 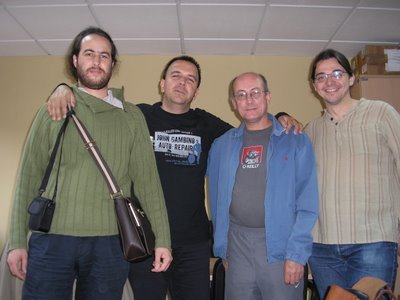 We have found some problems with the new beta version of VMWare (we will use on every school's server) that we are trying to deal with. We are also finishing the Kmenu of every profile defined. This week we gonna finish the document that describes the apps included on mEDUXa and, hopefully, make advances on some minor bugs we have. We also have to face some changes on the central server configuration. Some teachers already have the beta product so we gonna recieve some feed back from them. Let's see what happens. I think they gonna like it. We also will present these days the results of the tests we have been doing last couple of weeks.

I would like to present mEDUXa on Akademy 2006. Last year we made a conference about our plans. This year we want to show it. Call for papers is open so let's see if we write one.

The next step is to recieve feed back from some teachers thata work as advisors for the Canarian Educational department. Also we gonna do some tests on diferent schools before finishing our job. After that we gonna design the web and the support structure. As you can imagine, there's a lot of job to do. This is only our first stop,but is the big one.

Anyway, we still have some fixing to do in mEDUXa. Firefox have to be customized in order to avoid students from changing the network configuration or its default URL. We still have some minor problems with the icon positions of the devices.

We gonna add two students to the project.They gonna do the last year's project about mEDUXa. I think is a good way to involve ULL college with mEDUXa. Most of the job we are doing can be used by college students. I remind you that everything we are doing is GPL and is going to be on a public repository once it is finished.
Posted by Unknown at 22:06 No comments: Links to this post